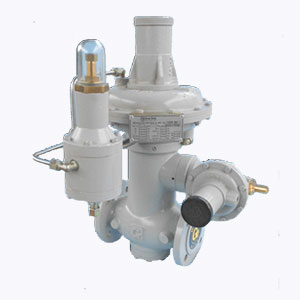 Gas pressure regulators type 137-BV in its initial position (no gas in the pipeline) is closed, i.e. spring force presses the pad unit against the nozzle through the rod extension and and the rod. The shut-off mechanism head (x) is spaced from its seat on the lateral side of the nozzle carrier allowing the gas flow to the nozzle carrier interior and the pad unit. The pilot is in the open position. When gas in the installations is at pressure (p ), it enters the regulator body and reaches the pilot through 1 the connection. The relationship between the actuators (diaphragm, spring) is established in the pilot according to the set outlet pressure. This leads to the formation of a control pressure, which enters the chamber above the regulator diaphragm via an impulse line, and pulling the diaphragm, it separates the pad unit from the nozzle. Gas flows into the chamber under the membrane establishing the balance, while the bottom chamber is discharged to the outlet line via the impulse line. In this way, the balance is established, which provides the value of the set outlet pressure. The pressure increase causes the gas to enter the pilot and the bottom diaphragm chamber via the impulse line (upstream of the regulator), closing the pilot. The values of the control pressure (under the diaphragm) and the outlet pressure (above the diaphragm) are almost equalised, causing the spring to push the entire diaphragm assembly, rodand pad unit, thereby reducing the outlet pressure to the set value. If the outlet pressure has a tendency to decrease, the opposite happens. These pressure changes are within the limits defined by the regulation unit (AC). This type of the regulator integrates a balance diaphragm, which ensures better regulation and considerably higher flow. Pressure regulator type 137-BV, when failed, is in the closed position In the case that the diaphragm breaks, the pressures above and under the diaphragm equalise causing the spring to close the regulator.