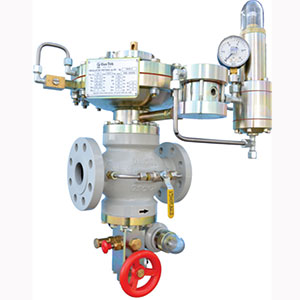 This way, outled pressure value remains unchanged within accuracy group AC. If outlet pressure decreases the opposite happens. Gas pressure regulator type 149- BV is fail close ie, when diaphragm fails, values of pressure above and under it will equalize, so spring force pushes diaphragm assembly downwards. This motion is transfered through the rod causing the shutter to move toward the nozzle seating surface to disable flow. There is an option of heating of pilot type 118- PP using warm water (90/ 70 °C) in order to prevent freezing.

Gas pressure regulators type 149 and type 149- BV are equiped with a pilot type 119. Pilot type 119 is used for high pressure control. In the absence of pressure, pilot is in open position, i.e. force of the spring, through stirrup act on the rod and maintain the nozzle opened. Gas from first stage pilot type 118- PP (at pressure p ‘) is brought at pilot type 119 inlet. Outlet pressure from regulator p , through impuls pipe, act on lower diaphragm, and together with spring maintain the control pressure p constant. Control pressure is through impuls pipe bringed up at the lower side of regulator diaphragm. At the setted value of control pressure, pilot is still opened, and gas flows from lower dipahragm hosuing of regulator to upper dipahragm housing of regulator.

Gas pressure regulators type 149 and type 149- BV are equiped with a pilot type 118- PP when inlet pressure is higher than 25 bars. Pilot type 118- PP is used for high pressure control. In the absence of pressure, pilot is in open position, i.e. force of the spring, through rod act on the shutter and maintain the nozzle opened. Gas from regulator inlet (at pressure p ) is supplied to pilot type 118-PP inlet and flows over perforated sieve and filter cartridge to reach the nozzle.

By turning the key, the space for the lock ball is provided (f) and the stem (g) forced by the spring pushes the lock head (h) against the seat stops the gas flow. A pressure drop from p to p decreases the force that acts on the pilot diaphragm of the shut-off mechanism, causing the low pressure spring (i) to move the pilot lock stem, which activates the shut-off mechanism as in the previous case. Deactivation of safety shut-off device (mechanism):